There were ten acts on two stages, plus a DJ before and after. Despite a bit of light rain off and on, it was a fun day of free music. There wasn’t a lot of country, but every act had members from the state of Alabama.

Achy Breaky Heart was one of the country songs represented in the DJ set (though it was a remix).

Lamont Landers Band was the first live act of the day, and I’d call it R&B/funk.

Then, I saw Jus Gruv, which is more R&B covers than not, but also covered Sweet Home Alabama, and even a Fleetwood Mac song.

The Blind Boys of Alabama we’re up next, and they’re one of Alabama’s greatest musical treasures (since 1939 !). Even if you’re not usually into “Jesus music,” please check these guys out. They’re fun, inspirational, and sing very well.

Early James and The Latest are a folk duo- one guy who sings and plays the guitar, and one who plays the bass fiddle.

Moon Taxi is mostly rock/pop, but they’ve recently opened shows for Zac Brown Band. Moon Taxi brought everything from confetti to inflatable tube men, so they were a great choice for a party atmosphere. They didn’t do the Kacey Musgraves cover that I posted their video for a while back.

The Allen Tolbert Unit is a bluegrass outfit that has been around for many years. Allen Tolbert regularly teaches guitar lessons, and is a well-respected picker. Their set was all covers, closing with Freeborn Man.

The mighty Commodores we’re next. No, Lionel wasn’t part of the deal, but this was still a treat. There were original members who have been in the group 51 years !

At that point, I had a decision to make. I had a nice seat for the main stage, which had two more acts, or I could try to run over to the second stage for it’s final act Matt Jones and try to get back. I decided to stay put, so he’s the only act I didn’t see.

St. Paul and the Broken Bones are a very large band. I’m not sure if you’d call them rock or R&B or something in between. They have a trombone and other horns, but the high, screaming vocals are towards the rock side.

Jason Isbell was the final act before the fireworks. Amanda’s fiddle playing is a highlight of the band. 24 Frames was the opener. To finish the show, he brought out the guitar that Ed King used to create the iconic Sweet Home Alabama. He said he wanted to play the guitar for audiences rather than just hanging it in a museum. 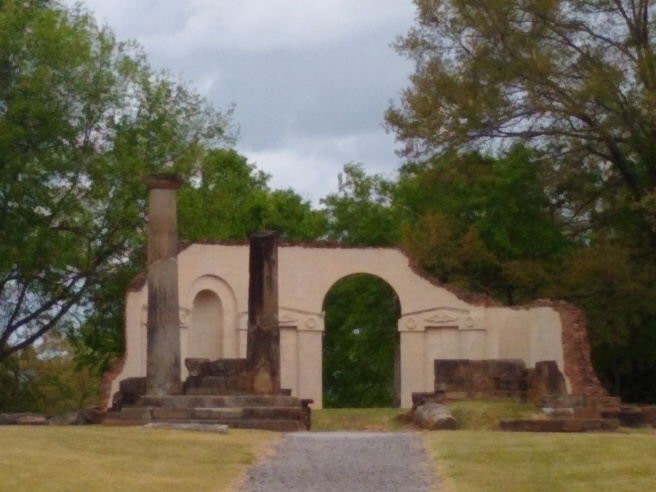 Any song from George Strait’s or Reba McEntire’s new albums would be worthy. I also added songs from Randy Rogers and Kylie Rae Harris: March-April 2019 Country Plus Showcase.

I turned on the (mostly pop country) radio in Tuscaloosa this morning, and was pleasantly surprised to hear Jason Isbell’s “Alabama Pines.” He’s headlining the Tuscaloosa Bicentennial Bash tomorrow. All eleven acts on two stages are originally from Alabama.

George Strait’s new album is finally out, plus Reba McEntire’s album is on NPR First Listen (as is Molly Tuttle’s). Target has a deluxe version of Reba’s album with a couple of extra songs. Tim Bluhm landed a spot on my January-February list, so I will want to hear his new album, too.

I had already planned a trip back to Alabama to visit relatives, and my timing worked out to catch the first day of the Songs On The Bayou songwriter festival in Morgan City, LA. Tonight’s event was free, with an informal song swap by the lake, followed by a full band performance by Cliff Hillebran.

I last saw Linda McRae at Americanafest three years ago, when she was part of a Canadian showcase at the Station Inn. She’s from Vancouver.

I also ran into the McClendons from my hometown of Tuscaloosa, Alabama. Sadie McClendon is the youngest member of the Last Honky Tonk Series, and she was on stage with Jamey Johnson and Cody Jinks at their Huntsville, Alabama show a few weeks ago.

I parked next to a group called 2Country4Nashville.

Anyway, do check out the names participating in this festival, and the 3rd Street Music Festival after that.

March became much busier than I expected, thanks to some travel opportunities, so I’ll be covering an assortment of cool things in Alabama, Tennessee, and Louisiana. I’m barely back from a wonderful western road trip that we put together rather suddenly, so I might be a bit behind in covering new music as thoroughly as usual.

The Rolling Stone article about Lil Nas X contains an interesting line. As usual, Rolling Stone tries to turn things to race-baiting or other leftist chest-beating, and it’s easy to get sidetracked by that, but the curious bit isn’t about this song itself (which *ducking* is actually kind of funny). It is this quote from Danny Kang: “There’s a way to manipulate the algorithm to push your track to the top.”

As much as a lot of us like to curse at most of the stuff on radio and the shortcomings of the radio model, the streaming model brings a whole new set of potential problems to the table.

YouTube reviewers Lost in Vegas are back after a pretty good break, and have changed their format somewhat, because apparently copyrights are such that they made zero off of most of their extremely popular reviews. Their first review with the “new format” features Texas country artists Cody Johnson and Randy Rogers, and more Texas country reviews are on their agenda.

Luke Combs’ “Beautiful Crazy” is on its fifth week  dominating the country airplay charts, so here’s the Lost in Vegas review of that song from September 2018. I tend to agree with Lost in Vegas’ country reviews more often than not, and this is one of those times. “I’ve heard other country songs that are just better.” “Lyrics were pretty basic.” Yep. I’m generally positive toward Luke Combs. He’s better and more country than most of what’s on modern, mainstream country radio, and comes across as very likable and positive, but he’s been promoted past others who make music that grabs me as more dynamic and interesting. He’s young, though, and might be able to add more dimensions as his career progresses. I’ll admit that I’m not nearly as familiar with his music as I probably should be, considering his superstar status on radio and streaming. Regardless, do check out Lost in Vegas. There’s a lot of good stuff on there.

Congratulations to Luke Combs, Ashley McBryde, and something called Landco on their early ACM wins.

The title track to the new Cleverly’s album, “Blue” (a cover of the Eiffel 65 song) joins my Bluegrass Covers list.

The March-April Country Plus Showcase is already up to 38 artists. The Cleverlys album is almost exclusively goofy covers, but the hidden gem is the equally goofy original, “Girl in the Sky.” Texas country fans will want to check out the Felix Truvere video for “Always Somethin’,” and Americana fans will want to check out Jim Lauderdale’s “Secrets of the Pyramids.” Bluegrass folks will want to check out Molly Tuttle’s guitar pickin’ on “Take the Journey.”  Tom Russell’s “Isadore Gonzalez” harkens back to Buffalo Bill’s Wild West Show. I can’t overstate the importance of Buffalo Bill in popularizing the romanticized version of the American west and the cowboy superhero. The western part of country & western owes greatly to the Hollywood western movies. Many of those movies drew inspiration from the popularity of Buffalo Bill’s Wild West Show decades earlier. If you’re ever near Denver, check out his museum. His colorful stage outfits from over a century ago will remind you of the “classic country & western music” clothing so many decades later.

One of the unfortunate side-effects of compartmentalizing my 2019 lists in two-month blocks is that my 160-song January-February 2019 Country Plus Showcase doesn’t get any views anymore. This music is still pretty dang new, folks, and some of these artists aren’t featured many other places. I’m not trying to brag, but there’s some good stuff hidden in there.

I’m also keeping an ear open for potential additions to my 2015-9 Southern Rock Plus Showcase.

The last stop on our road trip was the Heart of Texas Country Music Museum in Brady. It isn’t a huge place, but there are lots of interesting bits on display, from Elvis Presley’s bumper car to George Strait’s necktie. Jim Reeves’ tour bus is open to wander through. There are items from Loretta, Dolly, Reba, Johnny & June, George &Tammy, Bill Monroe, The Mandrell Sisters, Ray Benson, Kitty Wells, Bob Wills, and so many more. The volunteer worker said that the Rose Maddox dress was one of the first items in the founder’s collection.

Most items on display were donated by the artists or their families. Heart of Texas has its own recording studio, and sponsors many events, including an annual music festival that ended yesterday. This is “hyper traditional” country, for the most part. I recall seeing the Heart of Texas artists’ display at the Ernest Tubb Record Shop in Nashville. The weekly Midnight Jamboree radio show, which is usually in Nashville, was in Brady yesterday. If you like “very traditional country” (and I like bits of everything from very traditional to very modern), be sure to check out their family of artists.

We see ads for the museum and its associated events regularly on RFD TV.

Here’s a few photos from this afternoon.

Before we get to today’s topic, I’ll mention that I added a few songs to the March-April Country Plus Showcase, so there’s something to listen to while reading.

I’m always looking for something a little different to post about. Well, how about a country music-themed Las Vegas topless dancing show ? Eat your heart out, NPR. X Country at Harrah’s is one of a number of shows in the X series (see also X Rocks and X Burlesque).

The music they dance to is mostly modern pop country. There’s some variety, though. For the classics, I heard a bit of Dolly Parton, Reba McEntire, Johnny Cash, Buck Owens, and Patsy Cline. There were Hee-Haw type jokes, too, and stand-up comedian John Bizarre had a routine about halfway through the show.

Trace Adkins (“Swing” and “Honky Tonk Badonkadonk”) and Little Big Town (“Better Man” and “Girl Crush”) were the only artists I recall hearing more than once, unless you also count the music before the show (Chris Stapleton’s “Midnight Train to Memphis” played then, and “Tennessee Whiskey” was during the show).

One of the stage props was the front of a Ford truck,  which a particularly attractive redhead hit repeatedly with a baseball bat during Carrie Underwood’s “Before He Cheats.”

The show has been around since 2015, and here’s a 2017 article in the Las Vegas Review Journal.

The Vegas Gone Country show opened at the Planet Hollywood Casino on March 3rd, and I enjoyed seeing the show today. The show features a rotating cast of tribute artists, along the lines of Legends In Concert. There was a four-piece house band backing everyone.

Johnny Cash was the host today, and Reba McEntire, Miranda Lambert, and Garth Brooks we’re also represented. Here’s a shot of the closing number, with everyone joining in on Ring of Fire.